Doe's this look familiar to anyone? I was racing in Chicago this weekend, if that helps.

Well Geronimo and I went up to Chicago with the Mrs. and her Friend. G and I went into the race with a game plan and unfortunately that plan absolutely did not work and it was basically just a real bummer for the both of us. It was good to be out racing again and it just made me alot more excited about the next 4 solid weeks of racing leading into the big race of the year.

Breeze On
Posted by Breezer at 7:57 AM 5 comments:

The season started off quite nicely for these fellas, but who would have thought a 5th place ride in the Tour de France would have be a few months away for one. Congrats VdV.

Yes it happened. Last night was the first time in nearly 3 years that I took part in track racing. Not only that, but it not only felt like it, from the outside it probably looked like that as well. So after a half an hour of putting the good ole clown bike together it was time to get on the track and do some warming up. Right from the first moment on the track I knew the night would be interesting.

The first event was most suited to my strength, a 1km scratch race. To be honest I felt just lucky enough to advance into the final. After that was one race I never got the hang of before and that was the elimination. This is where the last rider across the line each lap is eliminated. Some how each time I have done this in the past I have been the first rider eliminated. So I felt like anything after second rider eliminated would be an improvement and something I could build on in the future. I was able to hang around long enough to be the last one eliminated before the sprint for the top 3. I thought there were only 3 of us, but there was 4 and I was gone.

The last event was the 10mile scratch race. Nothing really exciting here except for the end when after 2 riders had lapped the field we were sprinting in for 3rd. In the last two corners I found myself racing my friend/housemate/athlete as he had the sprinters lane and I was coming over the top. It was neck and neck to the line as all I could think about is how I got to beat the protozoa. It was all in good fun as I narrowly took 3rd. Nice job Paddy on that one and your big "W" in the 1km scratch race.

I can't wait till next time.

Breeze On
Posted by Breezer at 12:30 PM No comments:

I saw this giant soft shell turtle while out riding yesterday and it made me think of Clayton because of it's size. This picture does no justice as you can't compare it to anything. But trust me it was huge. Kind of a lot like this photo, if you could compare it to another turtle.

Good thing he had me to lead him out so that I could give his lower half a draft.


Climbing up the final climb at Fitchburg. The only thing I take away from this photo is that for the first time I actually see how sweet the 'stache was!

Wish I didn't have pink eye and a sinus infection during one of the most important races for myself and the team. Luckily everyone else on the team was rippin it and we were definitely a present in the race being represented in breaks and with Clayton taking a hard fought second in the NERW series. It was awesome seeing him sprint all the time in races that were fairly fast.

Well doing an NRC criterium tomorrow in Louisville. It is actaully kind of nice having a race of this caliber close. 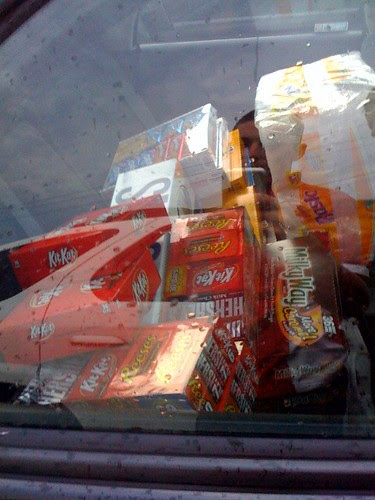 I wish the back of our team car was this stacked. Of course with this
type of food you'd have to keep it going before the sugar rush was over.