Not making promises, but going to try to complete the FasCat Tour de France plan that I designed. Not feeling to confident in succeeding after today. I was 8 minutes into my 20 minute TT (Field Test) and I was ready to quit and did for a minute. However I told myself to just do what you can and stop stressing, which I've had to tell many athletes before. Too many times its to easy to get caught up in numbers, not seeing what you want and just quit. It's tough for me to go from being able to ride / race at 300 + watts for over 5 hours, to just being able to skate by for 20 minutes. But what should I expect after not training for nearly a year. The FasCat Tour De France plan should be a great kickstart to getting back into it.

So I basically just got back to riding this month, with 4 rides a week. But each ride has nearly been ride as hard as you can, which is easy to do when you have no fitness. Then obviously this is going to lead to some fatigue going into the plan, a plan in which you should be fresh for. This is what happens with some athletes who come to you looking to get coaching with a goal only a few weeks ago. There isn't much you can do in a few weeks. You can't get faster in just weeks, only fatigued. So the earlier you can start a plan towards a goal the better.

But here I am and here I go. Todays workout file.

Didn't ride the field test at the 5% over, but feel I was pretty much on mFTP. WKO4 has been tracking my FTP pretty well since returning to riding and I feel it's pretty accurate. Be interesting to see how it is after this 3 weeks. Each of the last 4 weeks I have been feeling a bit better. However I still get caught up in the trap of trying to ride in my 'old' training as opposed to my 'current' training zones. It is always important to have and use the proper training zones so you can maximize each day.

I rode out at the airport today. Actually found a nice section there that just so happened to be 14.5km (nearly same distance as Tour) and would take me 20 minutes without having to stop, or take any corners. 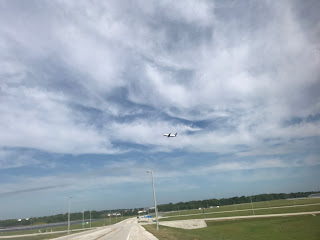 Planes taking off. At least something out here had some good power.